Buy Corruption of Power from Amazon 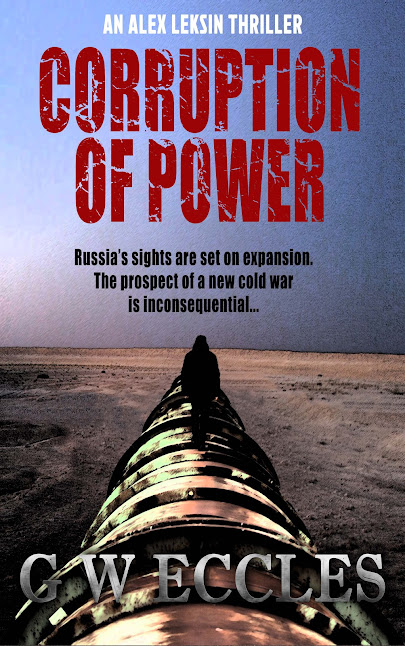 Russia's sights are set on expansion. The prospect of a new cold war is inconsequential . . . .

Ukraine is only the opening gambit, so far as the Russian President is concerned. With his sights set on territorial expansion and undeterred by the prospect of a new Cold War, he intends first to shift Russia’s economic focus towards the East in order to shield the country from the reprisals that his next move is sure to provoke.

The President delegates to his Prime Minister the redeployment of Russia's vast energy resources, a vital component of his strategy. But when plans for a pipeline to run through Turkmenistan and Afghanistan tilt off-course, it threatens to spread the current conflagration in the Middle East right up to Russia’s own borders.

Against a background of political corruption, state-sponsored terrorism and increased Taliban insurgency, the President turns to independent troubleshooter ALEX LEKSIN whose investigations take him from Moscow into one of the world's most sinister countries, right at the heart of Central Asia.

Initially his enquiries reveal nothing to cause alarm. Other factors, though, suggest otherwise: wherever Leksin goes, someone tries to kill him; people in a position to help him are assassinated; and information turns out to be misinformation.

And when at last he discovers the truth, he finds himself unsure of whom he can trust as the stakes get frighteningly higher.

Outstanding Thriller of 2016 Winner, IAN Book of the Year Awards

"If you like political intrigue and thrillers, this book is the one for you." (The Day Before You Came)

"A rollicking ride through corridors of intrigue and bloody chaos as the once powerful nation of Russia tries to recapture the strength of its greatness. Financial gain has replaced the manifesto of the Soviet Union with a long line of oligarchs. Money and power are real, and neither have a conscience. Into this cauldron walks an independent troubleshooter, Alex Leksin . . . . . Is he a pawn in a deadly game of chance, or an integral part of a carefully designed political machine that turns trust into dust in order to win against all odds? This a terrific thriller beautifully paced as it gets faster and more furious in the final third of the book." (Amazon customer)

"COP was full of subtle nods to local cultures, ways of interacting and lifestyles . . . . With the actual current climate surrounding Russia being as it is, the scenes with characters discussing Russia's nefarious international dealings felt frighteningly realistic." (The Book on my Desk)

"It really feels that the author has deep knowledge of both Russia and Turkmenistan (the two main backdrops of the book) that allows the reader to be entirely transported into the scenes described. A really excellent read that will keep you guessing until the end." (Amazon customer)

"The characters are well crafted and come alive on the page. The hero Alex, is flawed. He has made mistakes and yet he is compassionate. The story line is intriguing and very in tune with the current political climate . . . . . This story was well worth the time it took to read."  (Snuggle Books)

"I think Eccles has a great start to a series and Alex Leksin is a likable character.  Even though Leksin has a high moral standard, the Russian government does not, so it will be interesting to see how Leksin deals with that as the series progresses." (A Thrill a Week)

"I think Eccles has a great start to a series and Alex Leskin is a likable character.  Even though Leskin has a high moral standard, the Russian government does not, so it will be interesting to see how Leskin deals with that as the series progresses." (Amazon customer)

"Leksin’s investigations move along at the same rapid pace as in the first thriller, and the twists at the end of the book are well set up while coming as a complete surprise." (Amazon customer)

"This is a fast-paced, intriguing novel that causes the reader to second guess most of the characters’ actions and wonder whose side they’re on – and there are many sides and personal agendas in this story.  Just when I thought I had it figured out, some unanticipated twists near the end proved me wrong.  I enjoyed the different settings and vivid descriptions of the areas and the action sequences were tense and well-planned." (Books & Such)

"The synopsis provides a crack through the door that than opens into a full-fledged thriller. George’s fine sense for creating credible characters and painting moody atmospheres for their action makes this novel one of those that holds the eye and the mind until the final pages. Highly Recommended. GW Eccles is becoming one of the important figures in contemporary mystery thrillers." (Amazon customer)

“A well written book about Russian play for power. This is about as real as it gets in my experience. GW Eccles has first hand knowledge and has translated it into a first class thriller.” (Amazon customer)

“The beauty of this novel is that Eccles's obvious knowledge of the region, its geography, politics, history and present state of affairs is crafted into the story so that the reader is transported into a part of the world that few in the West really know or understand. This adds a real dimension to the story and allows the reader to submerge themselves into a world that undoubtedly exists but luckily few will experience first hand.” (Amazon customer)

“Thefts, corruption, treason, pursuit, assassins, murders… politics. These are the keywords for this novel. The book colourfully pictures Russian oligarchs and governmental officials, assassins of the sinister countries of the Far East, political jugglery and much more.” (Alexandra Engellmann)

“This thriller novel explores two governments, one Russia, the other Turkmen, both of which are corrupt and looking to expand their power bases in different ways. Corruption of Power boasts an elaborate and complex plot, where the twist and turns are particularly surprising and plausible. The strength of the novel lies within the unfamiliar locations where it is based and gives the reader a real insight into the growth and culture there.” (Amazon customer)

“A fantastic follow-up to The Oligarch. Highly recommended.” (Amazon customer)

"An up-to-the-minute compelling thriller that combines political sophistication with traditional gore and glory."

"This a terrific thriller beautifully paced as it gets faster and more furious in the final third of the book. I give it five stars."

“You will fall in love with this novel in the first chapter and will be powerless to put it down. . . Corruption of Power is an incredible reading experience.”