Buy The Oligarch: A Thriller from Amazon 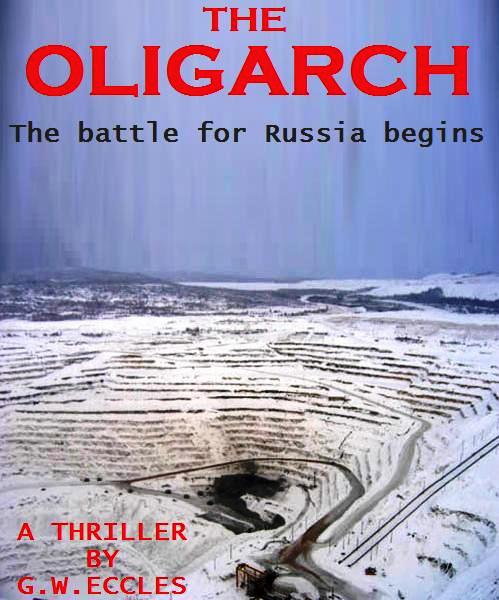 As the President takes on the power of the oligarchs, the battle for Russia begins . . . .

Following his controversial election for a third term amid widespread protests and allegations of vote rigging, the Russian President is determined to destroy the oligarchs before they destroy him.

When the global economic meltdown decimates their wealth, the President seizes this chance to demolish their power base. His greatest opponent - Anton Blok, owner of the mighty Tyndersk Kombinat - has a secret agenda and faces far more than just financial ruin as his empire threatens to fall apart, and the President knows that his old enemy will stop at nothing to avoid catastrophe.

With battlelines drawn, he turns to Alex Leksin, an independent troubleshooter, to thwart Blok's plans.

Against the challenge of hostile Arctic conditions, Leksin must tread a dangerous path through a labyrinth of corruption, terrorism and obfuscation until the exciting and unexpected denouement takes place in Russia’s northernmost seaport.

Set in Moscow, Ingushetia (Chechnya’s neighbour), and Tyndersk, a Siberian mining town inside the Arctic Circle and geographically cut off from the rest of Russia, the plot twists and turns within an authentic and disturbing background.

Awards won by The Oligarchn’t no party like a Lagos party.

Or so they say. This weekend, Dazed flew out to Lagos, Nigeria for the third annual MTV Africa Music.

Awards and spent a few days and some late nights meeting rap, R&B and kuduro superstars from across Africa: names like Banky W, Fally Ipupa, Daddy Owen, Cabo Snoop and Radio & Weasel, from Angola to Uganda, Democratic Republic of Congo and beyond, all huge stars in their own countries, selling truckloads of records despite rampant piracy and a rickety music industry. These guys are kind of the Jay Zs and Snoops of Africa, basically.

"Eccles takes on a controversial subject with the balls required to do it justice and pulls no punches with the plot and its revelations. A vein of love woven through the meaty flesh of the action brings the characters off the page and makes this book one to watch for the discoverers!"

"Appointed not to investigate a crime, but to work out how Blok can muster the resources to topple the Government, the novel's protagonist detective, Leksin, together with his Russian and American confederates, is drawn into a Russia of irresistible venality, nuclear proliferation, slave labour camps and interethnic war. One hopes these things are Eccles's fiction. But the way he depicts them - with an academic understanding of the complexities involved - they appear frighteningly realistic."

"Eccles should also be praised for the insight that he provides into modern day Russia, and the intricacies and corruption of central command. It is clear that the author has done his research, and to create such a thrilling book within such a rich and immersive environment is truly a tour de force of literature, and one that marks him out as one to watch for the future."

"A great read. I enjoyed the characterisations and the obvious experience of the author in Russia, its people and the difficult circumstances after the end of the Soviet era. The harsh environment of Siberia is also superbly described."

"A very, very good read. It gallops along at a cracking pace and it's one of those books you just can't put down. The plot is intricate and kept me enthralled right to the end."

"Ambiguity reigns in this book based in reality where nothing is as it seems."

"The Oligarch is a terrific read, brisk, well written, atmospheric and brilliantly conceived."

"Eccles is a highly engaging storyteller and this is a skilled and assured debut. It's so skilfully written that you can't tell that this is a first novel."

"I enjoyed this spy thriller. Superbly researched, it is frighteningly believable."